This afternoon, I was texting back and forth with Chris Cluff about Robin Wall Kimmerer and the podcast she did with Krista Tippet. I said that we, as a culture, really need to consider Indigenous knowledge, other ways of knowing and that I deeply value the concept of reciprocity as outlined by Dr. Kimmerer. He asked me what I meant about “other ways of knowing”.

I had to step back from the conversation and told him that I would figure out what I meant and get back to him. In this reflection, I realized that this personal interrogation had actually begun earlier in the day. In another threaded discussion on Twitter, just a few hours earlier, with a former student of my high school, I responded to her post connecting to the feelings of a young boy in front of a computer crying. This image, captured by the parent was shared with the teacher to let her know about his online learning experience. His teacher needed to know. 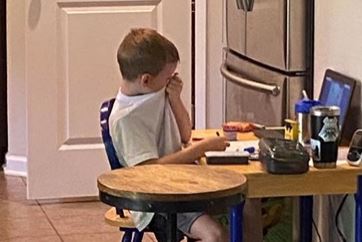 For me, the loss was presence.

Once the physical connections of student presence were severed in favour of digital ones, the learning that I gained by simply existing in the same space, breathing the same air, moving about amidst the myriad of nonverbal cues which we consume each day, vanished. The messages found in presence fell away and I was starved of vital physical and emotional information about my students. As teachers, we become accustomed to reading the body, the eyes, the facial expressions, the kinetic energy and we are negotiating a connection, an understanding in each moment; we are trying to know our students.

And, when you get to know someone really well, you just know without words. Ironically, in the documentary about the making of the movie, The Matrix, Keanu Reeves is asking the Wachowski brothers how Trinity knows that Neo loves her and they keep repeating, “He knows?” with greater and greater emphasis and a deeper bend in the knees with each repetition. Sometimes, my youngest son will, without prompting, be in a room with me and say, “What’s wrong?” He knows in a way that cannot be quantified or proven and didn’t need explicit evidence for him to discern it.

I got back to Chris and said,

I think about it in terms of culturally relevant pedagogy.

I knew this was an easy way out of a complex question. And here I am, hours later still musing on ways of knowing.

I am an English and Media Studies teacher, and Department Head of Fine Arts at Nepean High School in Ottawa, Ontario, Canada. I am concerned with equity and antiracist practices while recognizing that I am speaking from a position of privilege and continuing to learn. View more posts

3 thoughts on “Ways of Knowing”

Be well, be edified and enjoy!

finding energy through art and writing